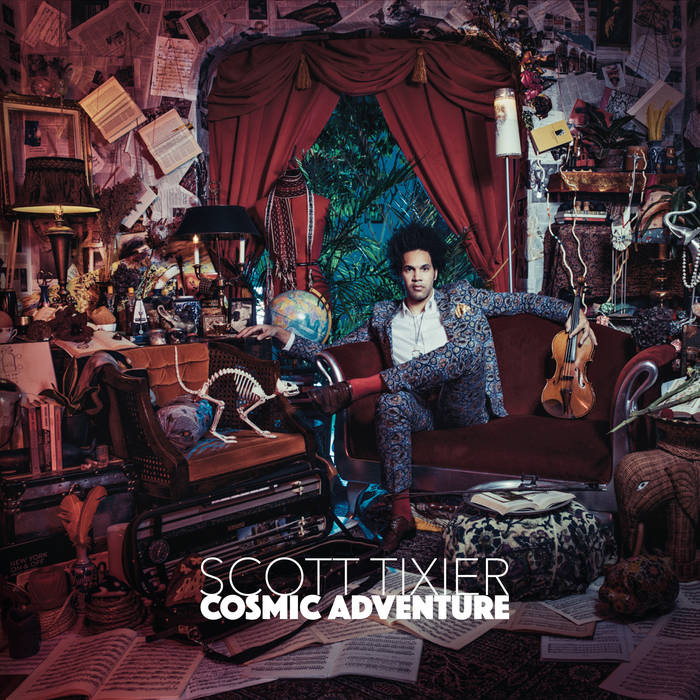 orshay Saw a reco on Audiostream, listened to samples on Bandcamp and presto! proceeded to buy the album. Tixier reminds me a bit of J.L Ponty but with a much fresher touch and disposition. Lokking forward to hear more.

maxlikesound With a band supporting him wherever he decides to go musically, Scott Tixier’s visions come to vibrant and stimulating life. “Cosmic Adventure” is more than a collection of tunes by masterful players, but a true testament to his abilities as a soloist, a band leader and a composer. Favorite track: Troublant Bolero.

Scott Tixier’s new recording, Cosmic Adventure, celebrates the mystical nature of life. There are inconceivably immense and unpredictable experiences that can be realized within one’s lifetime. It is the absorption of material and immaterial influences yielded by these events and relationships that helps one discover new worlds or new ways of navigating in the cosmos of existence. It is about breaking free from the self-imposed isolation of criticism, the pursuit of perfection and the fear of failure. The adventure occurs when you expel the pressures of competition and expectations to truly explore your place in the greater cosmos.

Violinist Scott Tixier has found himself amongst some of the most fantastic individuals and intriguing situations. His journey has been extraordinary, a truly cosmic adventure.

The French born Tixier moved to New York in 2007 with an unparalleled musical pedigree. His violin playing has been lauded by many important and highly respected musicians, including Pat Metheny, Jean Luc Ponty and Mark Feldman. He had already garnered experience in the jazz world playing with Jon Hendricks, Tigran Hamasyan and Lonnie Plaxico.

Since that time, the 30 year-old violinist has found himself in many eclectic musical settings, from Anthony Braxton’s recent opera Trillium J, sideman gigs with Natalie Cole, Christina Aguilera, and Gladys Knight to two years of touring with soul legend Stevie Wonder, not to mention his work in film and television. For the past 10 years, Tixier has been developing a new sound inspired by these collaborations both inside and outside of the jazz world, making him a multidimensional musician with a new voice on jazz violin.

Tixier’s first, well-received, Sunnyside recording Brooklyn Bazaar celebrated his then newly found home. His new recording, Cosmic Adventure, his first as a leader in four years, celebrates the serendipitous nature of life as a spiritual journey, with joy and hope but also sorrow and despair.

It was while appearing at a festival in France in 2012 that Tixier met pianist/composer Donald Brown. The young violinist hit it off immediately with the Art Blakey Jazz Messenger alum, and highly regarded arranger, during a six hour after hours hang. It was during his preparation to record that Tixier decided that having Brown produce the record would be ideal. Furthermore, Tixier’s partnership with engineer Dave Darlington and Brown ensured a well executed recording session.

The electrifying new band that Tixier showcases on his recording is made up of some of the leading lights of this new jazz generation. Having played with Tixier since he and Tixier were teenagers, harmonica virtuoso Yvonnick Prene is the perfect foil for Tixier’s violin. Pianist Glenn Zaleski is a friend and neighbor, not to mention one of the best emerging pianists in New York. The varied and instinctual playing of bassist Luques Curtis matches his tremendous tone, while the incredible ability and maturity of Justin Brown’s drumming is suited perfectly for the ensemble, because he can deliver energy and dynamics without overpowering the violin.

The compositions on Cosmic Adventure follow a trajectory, all having been written one after another. They are meant to mirror events and moods, both good and bad. The outcome is an eclectic and moving collection of originals and two arrangements of well picked standards.

The recording begins with the stirring “Maze Walker,” written as a study on life’s tendency to make one search for meaning, as if finding the end of a maze. The opening track features conga master Pedrito Martinez, as does the optimistically penned “Dig It,” a tribute to Stevie Wonder, with the sound of his harmonica in mind. The insistent “100,000 Hours” is all about drive and commitment to making oneself a better person (or musician, for that matter).

Django Reinhardt’s classic “Troublant Bolero” is performed beautifully as a ballad and for quite possibly the first time with piano and drums. Tixier commissioned the exuberant and swinging “Mr. Tix” from his longtime friend Prene. Next, Tixier re-arranged the classic Erroll Garner chestnut “Misty,” taking a number of chances to make the piece feel more contemporary.

The bouncy “Nil’s Landing” is for Tixier’s young, guitar-rocking brother, so naturally it is an exciting bebop tune with unique rhythm changes. The moving “King of Sorrow” is for his recently passed grandmother, who never recovered from her husband’s death 30 years prior, though Tixier sees a lesson in her pain: Don’t get consumed in sorrow, take a look at the world around you. The grand finale is the joyful “Beam Me To Mars,” an optimistic piece written for people who dream big. The track features saxophone titan Chris Potter, who Tixier connected with on the streets of Brooklyn during a chance encounter.

Performing on an instrument that has become a rarity in contemporary jazz, violinist Scott Tixier has put his individuality to his advantage. There have been ups and downs on the way to where he is, which is natural on all of life’s paths. Overall, he has enjoyed and wants to share the bounty of his Cosmic Adventure.

Bandcamp Daily  your guide to the world of Bandcamp